Scout Monteith received his undergraduate degree in 2017 from Lipscomb University with a Major in Biology and a Minor in Chemistry. He continued his studies at Lipscomb earning both his Master of Business Management degree in 2018, followed by his Master of Physician Assistant Studies degree in 2020. He is an active member of the following professional organizations:

Scout is a native of Charlotte, North Carolina, where he established a landscaping company in 2008 and operated it for 12 years. During that time, he also played NCAA Division 1 (D1) soccer at Lipscomb University, where he was elected team captain his sophomore year and remained captain for the duration of his collegiate soccer career. Scout was selected for the A-SUN Freshman All- 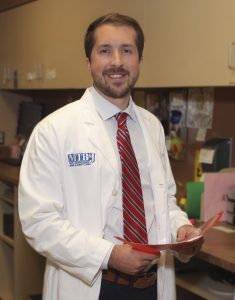 Conference Team in 2013 and the A-SUN Second All-Conference Team in 2016. He also earned A-SUN All-Academic Honors from 2013-2018 and was elected to the A-SUN All-Conference Academic Team in 2016. In 2017, Scout was 1 of 30 NCAA D1 soccer athletes in the country nominated for the Senior CLASS Award honoring the attributes of NCAA D1 senior athletes in the 4 areas of community, classroom, character, and competition. Scout also founded and held the position of President of the Lipscomb University Fishing Team from 2017-2019, qualifying for the National Championship both years. In 2020, he received the Roger L. Davis Leadership and Christian Service Award from the Lipscomb University Physician Assistant Program which was awarded to “The student who was a leader within the student cohort, performed well in the academic curriculum, served the other students, and demonstrated professional behavior in all aspects of his or her interaction while growing throughout the PA program.”

Scout and his wife, Mikayla, were married on May 15, 2020. Mikayla is a Physical Therapist at Maury Regional Medical Center Outpatient Physical Therapy.

In his spare time, he enjoys spending time outdoors with his family (fishing, hunting, etc.) and playing all sports.