Merrianne Patterson Landers graduated at the top of her class from Southern Illinois University Carbondale where she received her Bachelor of Science in Exercise Science in 2017 and her Master of Science in Physician Assistant Studies in 2020, while playing on the university’s NCAA Division I softball team. She was Team Captain during the 2016-2017 season. She received the Missouri Valley Conference Commissioners Academic Excellence Award in 2015 and was an MVC Scholar-Athlete First Team from 2015-2017. And in 2017, she received the President Council Academic Excellence Award and was nominated as Kinesiology Student of the Year. 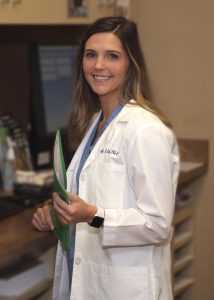 Merrianne is a native of Middle Tennessee, and initially came to work at MTBJ in 2016 as a Clinical Assistant, before making the decision to pursue her career as a Physician Assistant.

In her spare time, she enjoys relaxing and spending time with friends and family.