For the “Love” of the Game 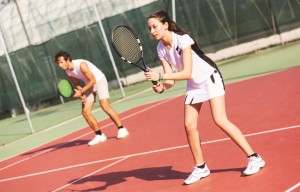 Every sport offers some level of health benefits, such as cardio and endurance. Thankfully, most sports can also be adapted to fit the athletic ability of the player. From childhood through adulthood and even through the senior years, the game of tennis is one that can be fun and beneficial to all age groups. A few great advantages of the sport are social interaction, competition, and skill development. But perhaps the best advantage of all is that it can be played throughout a lifetime. No wonder more than 28 million Americans played the game in 2012.

Tennis is a very forgiving sport. A novice can spend less than $50 for a racquet and a can of tennis balls and find a nice quiet court in which to spend the afternoon practicing different swings. Assuming you have a teammate with similar athletic strengths and weaknesses, the two of you can spend the whole day playing leisurely and never breaking a sweat. For those who have the desire and ability, tennis can easily progress to a professional level, boasting some of the most physically fit and skilled athletes in the world. Skill and ability and rules all come together to create a game that some have spent a lifetime mastering.

Tennis as we know it today originated in England, although its original development dates back to France and the 13th century. The first concept of tennis was introduced in fifth century Tuscany and resembled a game of hand ball, where players used their hands to propel the ball back and forth. The world’s oldest tennis tournament, the Wimbledon Championship, was played in London in 1877. The U.S. Open was first held in 1881, the French Open in 1891, and the Australian Open dating back to 1905. These four events and their long history now comprise the most prestigious pro tournaments called the Grand Slam, or the Majors.

Attire has significantly changed over the years, especially for women. In a time where women were scolded for showing excess skin – we’re talking wrists and ankles – the resulting outfits made it very challenging to play the sport. High collars, fur trim and corsets forced women to play daintily and with much difficulty. On in to the 1900s, those standards gradually morphed to shorter skirts, lighter fabrics and short sleeves to accommodate the physical game women wanted to play. For men, their long pants were replaced with shorts starting in the 1940s. White clothing for both sexes was mandated by Wimbledon in 1890, further dividing the aristocratic class for whom tennis was a staple, and those in the working class whose clothing options trended toward darker colors due to the dirty work they often did.

The modern tennis game has changed little since 1924 when the International Tennis Federation set the standard rules. From its early beginning in England, France, and the U.S., tennis has become popular around the globe. Multiple countries boast championship pro athletes and tennis has truly become popular worldwide.

However, its popularity on the local level is because of its simplicity. You can play with just a racket and a ball, and only two people are needed for a real game. While a court is desirable and usually found easily, people can practice almost anywhere. A driveway, playground, yard, gym, and even a sidewalk can be lined or marked off to get started. A group of four people can play doubles and multiple players can form teams or leagues. But again, you can practice and play just by yourself or with a friend. And you can play for a lifetime, enjoying the game, the physical activity and the social interaction, or just focus on the competition.

It’s never too late or too early to get started. After all, what could be more fun than a game that has “love” in its scoring?

Categories: Articles | Comments Off on For the “Love” of the Game