Posted by Mid-Tennessee Bone and Joint on August 30, 2016

Dr. Davidson is proudest of how far Mid-Tennessee Bone and Joint has come, emerging from a clinic that had outgrown its previous location and is now housed in a 50,000 sq. ft. state-of-the-art facility. Throughout his many years in orthopedics, Dr. Davidson believes the biggest change has been the increase in the number of procedures that can now be done as an outpatient. He believes this trend is a good one as the concept of minimally invasive procedures is less traumatic and allows for buy effexor. 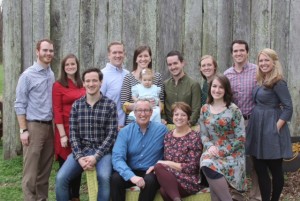 Personally, Dr. Davidson is proudest of his family. Both Dr. Davidson and his wife, Jeannie, grew up in Middle Tennessee and wanted to raise their children in a small town with a Christian school. They have been married for 35 years and they have six children, all of whom are alumni of Columbia Academy, and two granddaughters. Dr. Davidson still finds time to give back to the community through sports medicine and volunteering, serving as the team physician for all CA sports. He has served as a chaperone for CA’s mission trip to the City of Children orphanage in Ensenada, Mexico.

As for hobbies, Dr. Davidson enjoys taking a family trip each summer, usually to the beach where he and his family scuba dive. He also enjoys attending sports events, including football and soccer.

He is Board Certified by the American Academy of Orthopedic Surgeons and served as the Vice-Chief of Staff in 1998 and the Chief of Staff at Maury Regional Hospital in 1999. He is currently the president elect of the Tennessee Orthopedic Society.

Dr. Davidson currently serves on the Credentials Committee at Maury Regional Medical Center. He is also on the Board of Directors for the Tennessee Children’s Home in Spring Hill and was previously on the Board at Columbia Academy. He and his family are members of the West 7th Street Church of Christ.