Posted by Mid-Tennessee Bone and Joint on September 13, 2016 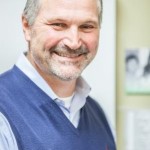 Professionally, Dr. Wade is most proud of how the Joint Replacement program has improved and become more competitive over the last several years. Due to advances in technology, joint replacements are lasting longer than ever before. MTBJ is able to offer joint replacement surgeries to patients in their late 80s, which is 10 years longer than what was previously offered. Consequently, the mobility and lifestyle of older patients buy synthroid.

In the last several years, Dr. Wade also noted much positive advancement in orthopedics. Joint replacements are now available in gender specific sizes that provide a better fit for women, he has seen shorter post-surgical rehabilitation times, and some patients are also seeing fewer restrictions after surgery.

He has been involved in the Junior Church Youth Group with First Presbyterian in Columbia and also served as deacon. He has also participated in the Habitat for Humanity in Middle Tennessee and in his free time enjoys biking and playing golf.